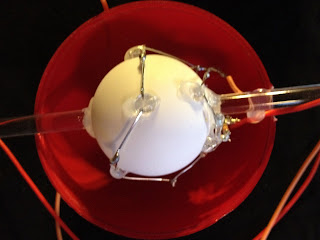 Here is a look inside the plastic ornament I'm using for the "ball of light" in Shalamayne. I'm using high intensity red LEDs pointed into a ping pong ball that acts as a diffuser. The ball is held in place by a clear acrylic rod, then I have the plastic ornament over that. The LEDs, wires, resistors and the ping pong ball itself are secured to the rod with hot glue. 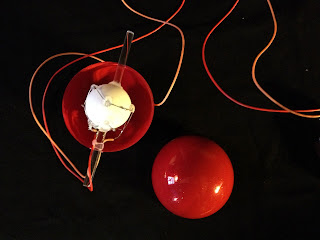 This lets the orb light up very brightly, without betraying individual LED light sources. As I noted earlier, the wires will run down the sword's handle and I'll add a switch under the pommel that will also control the LEDs behind the red gems in the hilt. 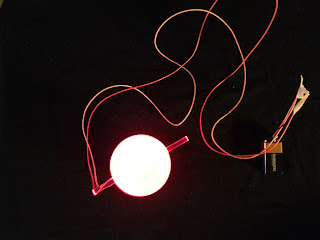 The orb's light is visible, even in a well lit room, although a darker room certainly looks better. Unfortunately, taking a picture of a light source doesn't work all that well. Once the whole sword is assembled, I'll take a few more pictures that will hopefully show off the effect a bit better.