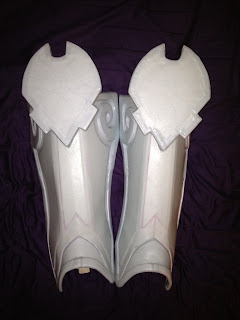 More progress on the leg armor pieces for Varain Wrynn.

Adding the trim pieces along the edges added a lot of strength and solidity, although it also caused the armor to distort a bit. I still need to reheat the wonderflex to bend them back into shape.

I attached the knee plates to the shin guards. Each is supposed to have a lion head on it, which are still being finished. Once I'm happy with the way it looks, I plan to make a latex mold and slush cast two in resin. I was originally going to sculpt two out of Styrofoam, but the material is so soft I was worried it would become damaged easily while being worn. Hit something wrong once and the poor lion face would be crushed.

I'm debating dedicating the boots I have for this cosplay by attaching Velcro to the inside of the shin armor and the boots themselves in order to help hold the armor in place. Right now I use these boots for my Steampunk costume as well, but maybe I should get another pair? I'll try securing the armor with straps and see how well it holds in place.

Finished all the bondo and sanding work for the shoulders. So it was time to put on a primer coat. This time I chose red/brown primer and snapped this picture while the paint was still wet. 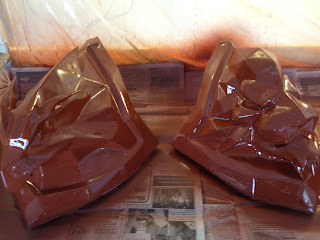 As the paint dried, all the remaining pits, cracks and other flaws became very visible. This will help in fixing all them. I expect to go through a few more cycles of patching, sanding, and painting before I move on to the final paint. 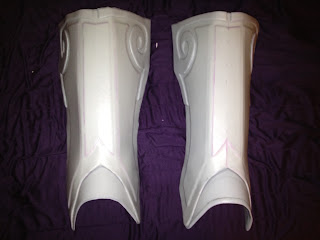 I have returned to working on the lower leg armor for Varian Wrynn. This piece is constructed with layers of craft foam and Wonderflex. I still need to add another layer of the outer trim, the bases of the lion face knee plates, and the straps to affix it to the boots.

Once everything is in place, I'll use the heat gun to do one final re-shaping before I begin painting.

It has been a while, but I have been continuing to work on the Varian Wrynn costume, in between various other projects. 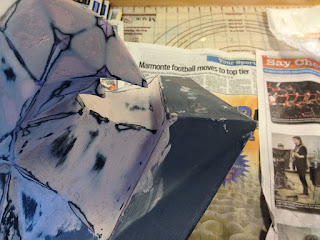 It was while I was working on the piece when I realized I had missed something. There are supposed to be circular blue gems at several places on the outer border of each shoulder piece. But the papercraft base didn't allow for mounting them. 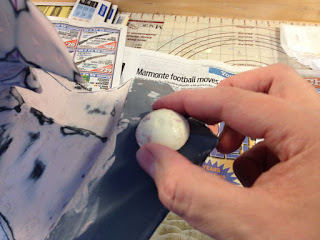 Several others who used Pepakura for props discussed how they would cover the outside with Bondo for a smooth finish. I decided to do the same, and also create flat areas (sockets?) for the gems. 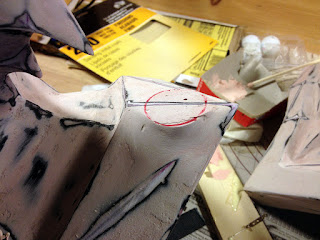 Once the shoulders have been finished, I will be able to securely glue the gems into place. 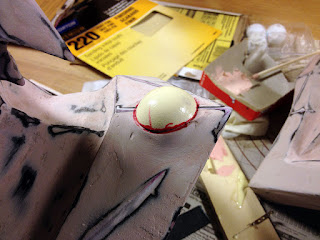