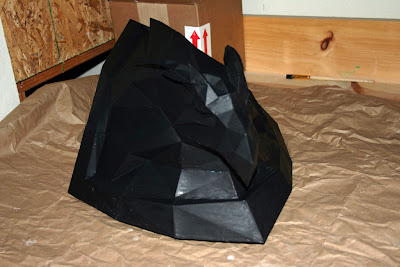 I wet sanded the outside surface of the avian shoulder to get rid of the obvious drips that I let build up during the initial process. Because the resin is nearly clear, I decided to put on a quick coat of gesso to see what sort of surface I have to work with. Sadly, details in flat black don't show up all that well in the photo.

I also started work on the scale armor effect for the sleeves. I'm using ink jet based iron on transfer paper. My ironing skills have a bit to be desired. 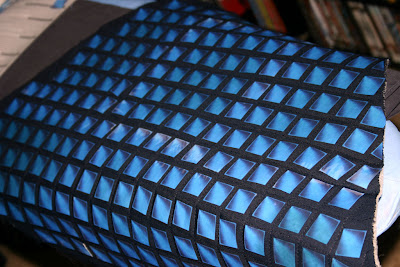 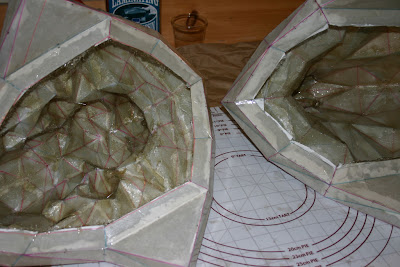 Emergency at work sure cut into my costume crafting time. I was working on the fiberglass Sunday when I was called in, since then I've put in three 10 hour plus days. But I did get caught up, I finished the main fiberglass work on the inside.

Tonight I'm going to apply one last resin coat on the outside, then this weekend I'll do some sanding to remove the obvious flaws. I'm looking forward to seeing how they look with a preliminary primer coat. Hopefully I can hide a bit of the polygon look.

I'm only going to do a minimum clean up on the inside, I'll give the fiberglass about another week to cure, then I'm filling it with expanding foam. Hopefully that won't make them to heavy. 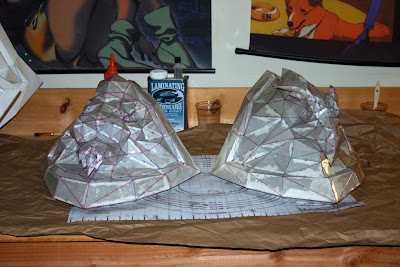 Went to see Conan the Barbarian at the local Muvico with a buddy of mine. It was pretty much what I wanted from a Conan movie. It was no Lord of the Rings, but it didn't feel like an episode of Xena either.

Acting was very good, it was fun to see Jason Momoa as Conan after his work as Khal Drogo on Game of Thrones. This Conan felt a bit more like the Conan from the novels and comics, with a great deal more dialog. Not to write off the Arnold Conan movies, those are classics.

Stephen Lang appears to be eastablishing a legacy of playing the villain in fantasy/sci fi movies as Khalar Zym in Conan and as Quaritch in Avatar.

Rachel Nichols as Conan love interest Tamara wasn't bad, but she was overshadowed by Rose McGowan's portrayal of Marique, as the erraticly evil sorceress daughter of Zym

Overall a fun film, I enjoyed it. 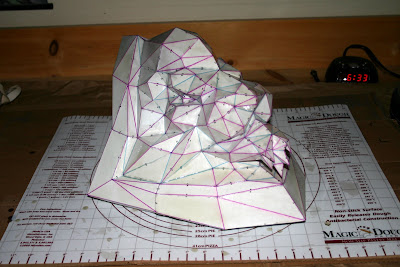 It seemed like it took forever, but I finished assembling the papercraft lion shoulder for Varian Wednesday evening. After work on Thursday I applied two coats of resin to the new shoulder piece as well as a coat on the areas of outside of the Avian shoulder I couldn't get to previously.

On Saturday I plan to apply resin and fiberglass mat on the underside to reinforce the whole structure of both pieces. 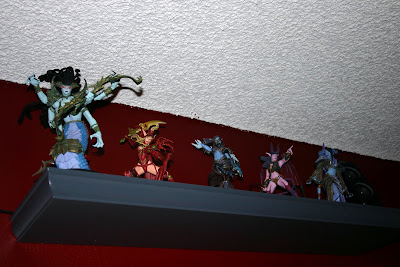 My friend Jason gave me the Lady Vashj figure from the World of Warcraft DC Unlimited figure series 4 for my birthday. She now sits up on the shelf with the rest of the figures I have, including Amberlash, Tamuura, Valeera and Sylvanus.

Email ThisBlogThis!Share to TwitterShare to FacebookShare to Pinterest
Labels: Figures, World of Warcraft 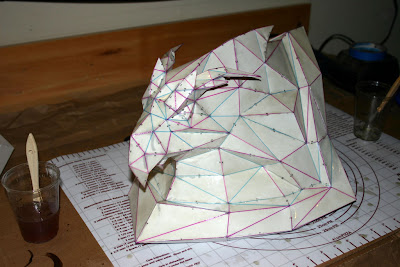 I embarked on my first use of Fiberglass Resin this weekend. I'm starting with the Avian Shoulder for Varian's armor. The whole process was pretty easy, although there were a number of things I had to do in preparation. I ended up ordering the resin from Tap Plastics, it was cheaper even with shipping than to buy it at the local Home Depot.

On the left hand side you can see I ambitiously mixed 4oz of resin, even with a set time of 20 min, I only went through about 1oz on the first coat. I held the sacrificial paint brush in the center of the mixing cup until it set.

Next I need to finish the properly scaled Lion shoulder and resin that. 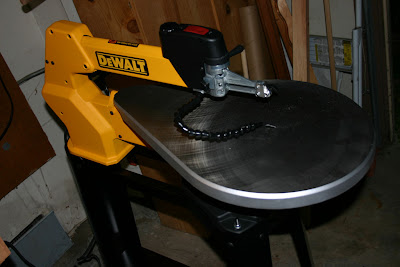 My Shopmaster scroll saw had seen better days. In mid-July it stopped working, the thing would hum when powered on, but nothing moved. With everything unpluged, I couldn't manually move the arm, which it normally could do. I was pretty sure something had siezed up inside either the arm mechanisum or the motor.

I had been considering buying a new Scrollsaw for the past year. The Shopmaster was a good introductory saw, it made it clear it was a tool I would used regularly, but it felt limiting.

I started looking around for the "next step up" in scrollsaws. I contacted Steve Goode, over at Scrollsaw Workshop, who recommended the Dewalt 788. Which prompted further research.

So this weekend my own Dewalt 788 arrived from Amazon. Compared to my old one, this is a serious pieces of machinery. It assembled rather easily, although I had to run dwon to the hardware store to get a wrench. Once in place, I fired it up and wow, what a dramatic improvement. This thing is amazingly quiet without any real hint of vibration. I didn't have any projects ready to cut, but I did a few tests and it didn't disappoint.

After assembling the sword I started priming it using black gesso. I have had good luck with gesso on my wood sword props and it did not disappoint this time. After eight coats I used 240 grit sandpaper to create a smooth surface. After sanding I used food filler to repair some of the imperfections both in the wood hilt pieces and the foam blade.

I sanded the filler down, then primed it again. I still have a circular piece to add to the base of the hilt and add details to the pommel and prime that.

Third part of the Sibling Rivalry update on RPG Weekly.

I have a new update on my Primisiti Pathfinder campaign up on the RPG Weekly site.