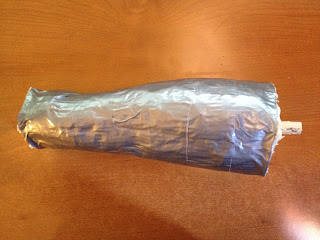 I have been having trouble figuring out how to build the bracers for Varian, but now I've been inspired by a post I saw on Facebook. Fev! posted about building bracers using a form made in the general shape of her forearm. That gave me the idea to create a simple paper-mache cast of my forearms, then fill that with expanding foam to create forms that I can build my bracers against.

The right arm was easy, but the left was a pain. However now I have a nice pair of forms the general size of my arms that I can use to build the bracers.