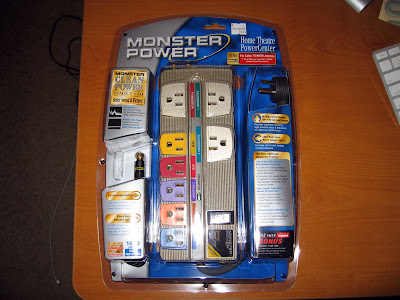 My sister gave me a $100 gift certificate for Wilshire Stereo, a very upscale local Audio Video store. She had won the certificate, but when she went into the place, she couldn't find anything she wanted for less than $100. This place is not a Best Buy. (If it was, I would have bought myself a PS3 game.)

So I went in there back in January, intent on spending my little certificate of Free Money. I made my way along the posh hardwood floors and plush carpeted television displays to the back of the store where the cables are offered. This collection of cables, most from Monster, were the only things in the store for under $100. I had a box of unused A/V cables at home, so I wanted to get something I might actually use, but they were so overpriced, I couldn't bring myself to spend money... ... even if it wasn't real.

However, this certificate had an expiration date, I was going to have to spend it before the end of March, or it would worthless. So I dragged myself back into Wilshire determined to exchange the certificate for some sort of merchandise. After some pondering I settled on the Monster Power Home Theatre PowerCenter, sensibly priced at $79.99.

That's right folks, I'm now the proud owner of a $100 Power Strip. (Wilsire doesn't give change on credit on that certificate, which is probably for the best.)

Now others will see your posh power strip and be jealous of your affluence.